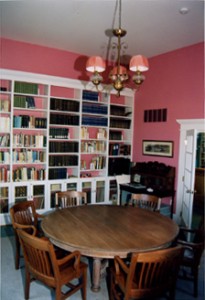 The Rosa Webb Room holds the Mackinac Collection, a historic assemblage of information about Michigan and the Michlimackinac area. This room is named in honor of one of the Grand Women in Mackinac Island history. 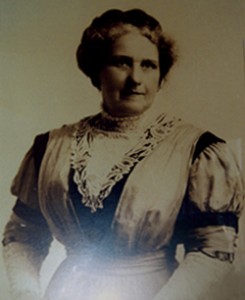 Rosa Truscott Webb established the first library on Mackinac Island and was influential contributor to the culture of the Mackinac Island Community. She was born the daughter of Mr. & Mrs. George Truscott in Port Hope, Ontario in 1853. When she was small, her family moved to the Island where George and had a business partnership with his wife’s brother, John Bates.Rosa married William Disbrow, a builder in 1872. They lived in the Upper Peninsula town of Munising where they had a son, Edwin Clark Disbrow in 1873. The next year her husband William died in an accident and Rosa returned to the island with her son.

In 1878 Rosa(Disbrow) Truscott married Charles Augustus Webb, the Commander at Ft. Mackinac. They lived together at Forth until Charles’ regiment was transferred at Leavenworth Kansas. The family traveled together on assignment throughout the West until Major Webb died of pneumonia while stationed in Texas in 1882, almost a year after the birth of daughter Mabel Marcia Webb.

The window behind the altar at Trinity Church, where Mrs. Webb was a church school teacher, was installed and dedicated in memory of Charles Webb.A talented musician, Mrs.Webb was an organist and choir leader at Trinity Church. She also gave voice and piano lessons, using games to keep young students interested in the lessons.Her son, Edwin, attended St. John Military Academy in Wisconsin. After joining the army to serve in the Spanish American War, he became ill with tuberculosis and returned to the to the Island where he died.

Soon after her son’s death in 1896, Rosa and her daughter Marcia left moved to DesMoines, Iowa where Rosa studied music and Marcia attended high school.

Rosa returned to Mackinac when Marcia left to attend the University of Michigan. After two years, Rosa insisted her daughter transfer to Vassar, where she graduated in 1903.

Organizer and president of the Mackinac Island Community Association, Rosa Webb, with the help of the Girl Scouts of Mackinac Island (Michigan’s first troop), raised money to establish a community center. The fund raising began one of the Scouts dressed a baby doll, placed it in a cradle and raffled it as a toy. The $10 raised from the raffled was the seed money for “The Girl Scout Building Fund” The Scouts continued their fund raising by organization benfits parties and in 1930, with $8,000 in the bank, the Mackinac Island Community Association under the supervision of Rosa Webb, purchased the John Jacob Astor House on Market Street to be used as a community center.For more information about the library today visit our FAQs page.